IBM's licensing model for Domino was quite complex. It was based on a combination of the functions and the version of the software, combined with the processing power of the server (s) measured using the so-called PVU (Processor Value Unit). This approach made it difficult to determine the correct license, partly because the situation can change again over time.

HCL has changed the required license to a "per user per month" model. This model is a new approach to Domino / Notes licensing. It doesn't matter how many Domino servers you have, the license costs are based on the number of users. There are no additional costs for the various Domino servers. You can have as many as you want as long as a server is only used by licensed users. 3 different user classes have been defined: CCB, CCX and Guest.

Complete Collaboration Business edition users are employees or contractors who have full access to all aspects of Domino. They can use any client (Notes, Nomad, Browser, etc.), create applications and access email. At least one CCB user license is required to run a Domino server. Those licensed under the CCB program have access to a number of programs previously licensed separately, Notes and Domino, of course, as well as Sametime, Traveler, Nomad, Verse and Connections. Volt can be added for a small additional cost per user per month.

A CCB user license is the paid basic license.

Complete Collaboration External is an addition to the CCB license, intended for users outside the own organization. CCX users are allowed to use Domino applications, but are not allowed to create or modify them. They can use any client to access applications and are allowed to use email functions built into an application (for example as part of the workflow). However, CCX users do not have their own email.

A CCX license is a paid (cheaper) addition.

A Domino server with a CCB license can also run web applications that support an unlimited number of guest users. A guest user can be an anonymous web user (no authentication) with maximum "Reader / Depositor" access. This allows you to set up anonymous web access to applications without additional licenses.

Guest users are an addition that does not require additional payment.

The image below from HCL shows the differences between the models: 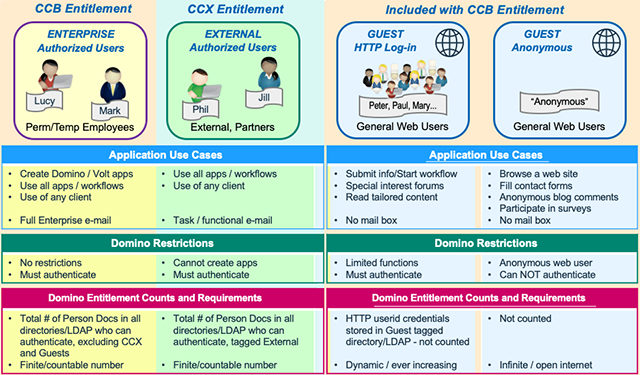